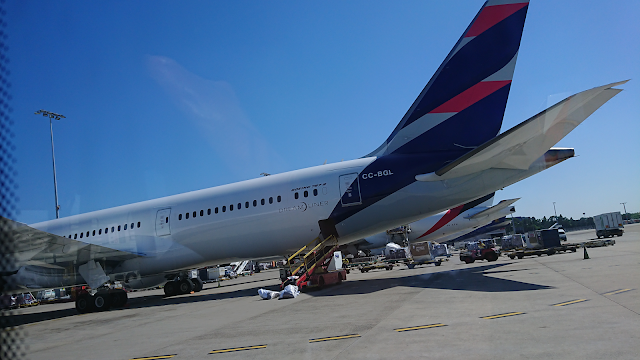 Before starting this review, it's time for a big shout out to Qantas for giving me the opportunity to quickly book a last minute ticket so I didn't miss the outbound flight due to my inbound flight (JQ500) being cancelled.

The cabin crew of QF414 did an amazing job for giving me the last-row seat on the flight so I was able to make the connection to the Business Class LA800 Flight to Auckland.

My inbound flight to Sydney was originally planned to be the Jetstar JQ500 arriving in Sydney at 7:25 am. That flight was unfortunately cancelled due to some unforeseen circumstances, followed by some of the worst customer service experiences I've ever had in my life, I won't overly dwell on this issue so I can keep this review positive and profanity-free. (Boo Jetstar)

I was able to quickly book a last minute flight (QF414) through my Qantas app which had an arrival time of 9:25 am, which was further delayed to 9:40 am. Luckily due to the extremely helpful/supportive cabin crew, I was able to be one of the first persons to disembark and make the connection. This included one of the attendants attempting to move me up to business class, despite the fact that it didn't work out due to the overbooked flight, however, I was placed in the last row of seats so I could exit via the rear stairs. 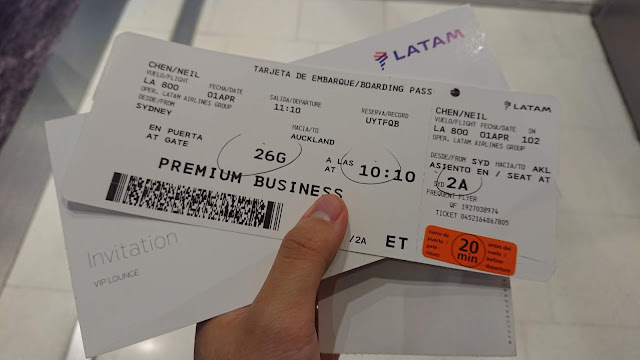 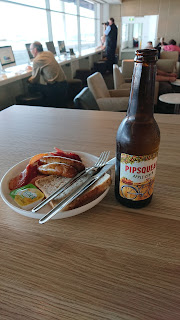 The check-in was extremely hassle-free as I was the last person to check-in, the LATAM Business Class clerk was very friendly and professional, she spoke very good English and was able to explain to me that I could remain in the lounge and all I need to do was to arrive near the gate 20 minutes before departure.

Arriving only an hour from the departure of an international flight was certainly a rush, so I didn't take my time to explore the QF Business Lounge which LATAM uses in Sydney airport. I had the time to grab some basic breakfast from the buffet along with a nice bottle of cider.

The lounge itself was very well equipped and the overall ambience was relaxing and calming, however it lacked the cozy/personal atmosphere as it was designed to handle an absurd amount of customers during peak hours.

Computers with internet connection were made available for the "social" customers and there were a series of wide window panes for the customers to relax and watch as the planes crawl on the taxi-ways. 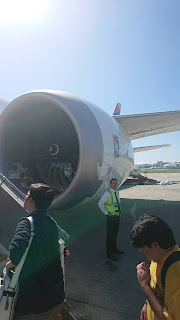 After spending about 30 minutes in the lounge, it was time for me to head to the gate, to my surprise it was actually an external gate which required buses to take you out of the main terminal. The boarding process was quite irritating as passengers were squeezed into airport buses while waiting for the bus to fill up, it was 40 degrees in Sydney with the quite the average air-con unit working overtime on the bus. Definitely, it wasn't a pretty sight, but after the longest 10 minutes, we were taken to the plane and allowed to board.

The plane itself was a beautiful and modern 787 Dreamliner (One of my all-time favourites) with a handsome blue and red paint scheme. You can truly appreciate the size of those latest generation Trent 1000 engines up-close (Trust me, they are huge) and it was quite easy to notice the composite materials that made up the plane up-close when compared with your traditional triple sevens.

After ascending the stairs, I was greeted by a very friendly hostess before guiding me to my selected seat (2A). I always choose 2A on the portside as it has always been my favourite Business/First class seat, it's the first to disembark while it's further away from the lavatories than 1A so you won't be disturbed by the flushing noise. 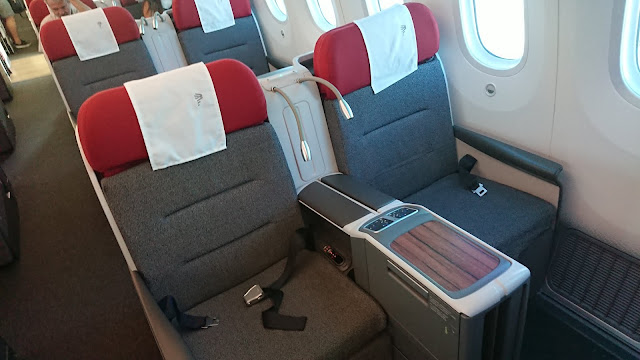 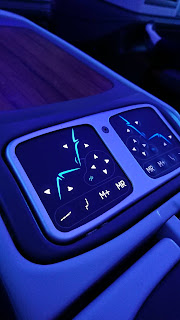 Like most other 787s, it had the generic Boeing oriented business class seats. Which in my opinion were the best, as you can actually look out the windows rather than being forced to face away from them by the diagonal seats/beds which many other major airlines use.

The seats were very wide and comfortable with the ability to transform into a fully flat bed with the push of a few buttons. The seat control was very easy to operate and featured a very modern design.

Just like every other Dreamliner, the cabin was very quiet and had the above average cabin pressure which increased the comfort level during flight, the magic dimming windows were always a wonder no matter how many times you fly on 787s.

Noise cancelling headphones were offered which further increased the flight comfort, it offered a good amount of noise cancellation but unfortunately, the sound quality was quite mediocre, so be advised to take your Bose QC headphones with you.

As expected from all premium services, champagnes and nuts were served before take-off which I thankfully drank and ate due to the flight being delayed.
The flight was delayed by nearly 30 minutes but the cabin was nice enough for me to be patient and the flight attendants kept all of our glasses topped up. 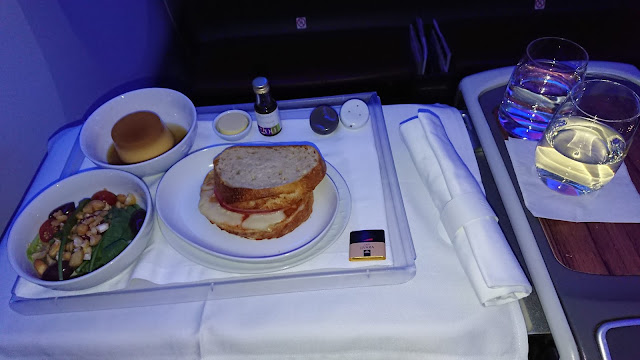 This is where this flight stood out from the rest, for a short-haul 3-hour Trans-Tasman flight, actual lunch was served instead of some snacks.

The lunch had an extremely appetising green salad with seasonal vegetables and nuts, a warm roast-beef sandwich and just to sweeten things up, a nice pudding with a square of chocolate was plated. There was a great selection of South American wines with a  broad variety of cheese was made available for even the pickiest diner to enjoy.

The presentation was great, it had some modern plates and bowls with a handsome dash of condiments. Overall, there wasn't anything that even suggests the airline was compromising quality in exchange of an cost-effective service.

With all the previous near-perfections, this was the last variable for a perfect flight, but unfortunately, this was the part that was quite disappointing. 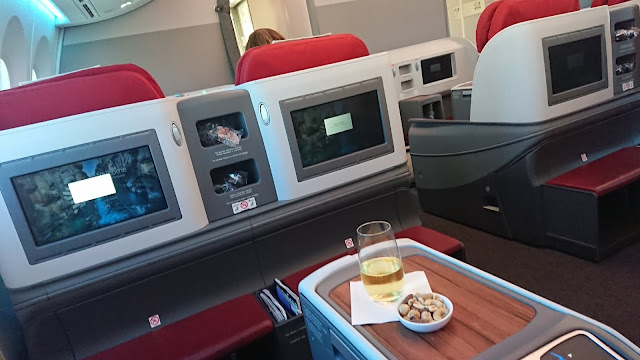 The entertainment system did include some of the latest blockbusters but that was about the end of it, it lacked many popular songs and TV shows that you'd always expect from any other major airlines. Since it was only a 3-hour flight, that wasn't a big deal, since one single blockbuster was enough to occupy the whole flight, but for longer flights that would certainly be the weakest link.

The generic 787 entertainment system, however, did perform as expected, extremely responsive and easy to use, the quality of the display was also at the premium standard. Overall that was acceptable for a 3-hour flight, but just to note the same cabin configuration was also used for long-haul flights (Auckland to Santiago), and in that case, it'd be appalling.

For a premium short haul flight, this flight was of great value, (Around 30% cheaper than rival business class flights) and I couldn't see any compromises made to the service quality for a more cost-effective operation.

I think this is a great entry-level business class flight that everyone could enjoy, it has full lounge access, lie-flat bed, premium cabin service and many more. Things that need improving on are the boarding process and the contents of the in-flight entertainment system, which can be ignored if you're flying infrequent short haul flights as the contents available are already enough to keep you occupied.

UPCOMING TRIP: Farewell to the queen of the skies

Neil Z
Auckland, New Zealand
My name is Neil and I absolutely love travelling! I grew up in the beautiful country of Aotearoa - The land of the long white cloud, I've always wondered what's beyond those blue skies and evergreen pastures, and why the Fantails in my backyard could fly with the uttermost freedom. I started enjoying travelling ever since I graduated high school, it was this curiosity deep down made me someone a tad different. Looking back it has been almost a decade, today I still get the same kind of awe when flying, but instead of curiosity, it is now a kind of passion mixed with a sense of belonging. After accumulating over 100 trans-tasman flights and multiple scores of international flights, I am still as passionate about flying as I have ever been.