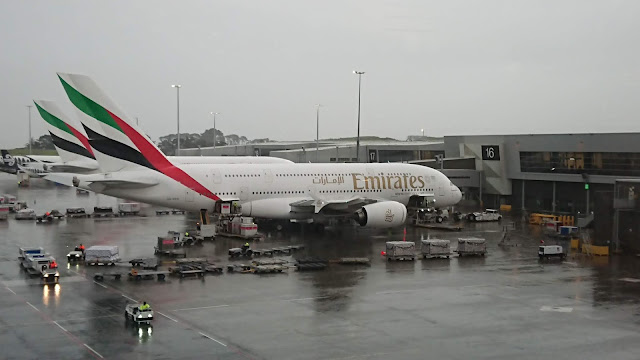 By having the largest fleet of A380 in service, Emirates is certainly one of the world's leaders in the operation of A380s. Here I will share one of my experiences flying first class on one of those giants Trans-Tasman.

When you think about A380 and first-class you will automatically get an image of ultimate flying comfort and experiences, and you're not wrong. Even today, I am still very grateful that I once had the privilege to enjoy one of the last Emirates A-380 flights from Auckland to Melbourne, it was the only time I flew the A380 between Auckland and Melbourne, and unfortunately, that had to be my last.

This route was originally an A320 flight route between Auckland and Melbourne, it had little market significance on the Tans-Tasman flights 'til 2016 when Emirates placed the majestic A380 on this route which enabled us to have a completely new style of travel. Unfortunately, this did not last long, as the sales figures plummeted, the empty seats were a bit too much for Emirates to handle and by the end of March 2018, Emirates abruptly pulled the plug on this incredible route.

With the First class expedite, the check-in process was undoubtedly lightening fast. I cleared the customs within a few minutes all thanks to the express lane. I deliberately arrived early so I could enjoy the Emirates First lounge, which was a 5-minute walk from the customs to the Lounge. After arriving in the Emirates lounge, the front desk staff kindly asked for my lounge invitation (Which I quickly produced) and it ended with a very fast/hassle free entry.

The lounge had a very modern design with many beautiful decorations and paintings on the walls, it generally emitted a calm and relaxed ambience for the weariest of travellers.
A buffet was provided with a wide variety of alcoholic and non-alcoholic beverages, accompanied by a good selection of desserts.
Overall the food and drinks were delicious and the buffet was constantly being replenished so everything was made available as per customer demand.
The size of the lounge was quite impressive as it was built to accommodate up to 3 A380 fights within an hour of each other, so I had little trouble finding a spot to sit.
The seatings were comfy and most of the facilities were clean and properly maintained. Wifi was offered but I didn't use it as I didn't have an Emirates Skyward account to log-in.

Overall the lounge was certainly one of the best I've come across as it was created with the style of Dubai's extravagant lifestyle along with the classic kiwi hospitality.

The flight itself was slightly delayed due to weather, which wasn't a big deal as I wasn't in a rush. After a short 10 minutes wait, I was invited through first class boarding and we went through a separate lane to board on the second floor. The hostess was very polite and made quite a formal yet friendly welcome and led me to my allocated suite, she also offered to hang my jacket in the designated jacket storage compartment in my suite which I kindly refused. 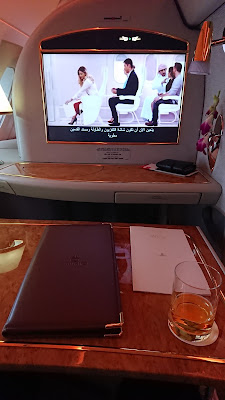 The suite itself was beautiful, elegantly designed with a lie-flat bed, full entertainment system and even a minibar where you can have a good variety of soft drinks and snacks on demand.

A writing pad was provided, could be useful for anyone who wants to make a quick memo of their experience high above.

The cabin controls were extremely easy to operate even for someone flying on this cabin the first time. The doors of the suit can be closed after take-off for privacy purposes.

Due to the large frame of the A380 and the distance from the engines, it was already very quiet during takeoff and landing, active noise cancelling headphones were provided in a solid hard casing which further blessed you with great moments of peace thirty-thousand feet above.

Dining
Pre-flight champagne was offered but instead, I ordered a Heineken, which was quickly served in a glass. A leather-bound menu was available for you to decide the dinner options with a very comprehensive range of options as well as a top-notch wine list. 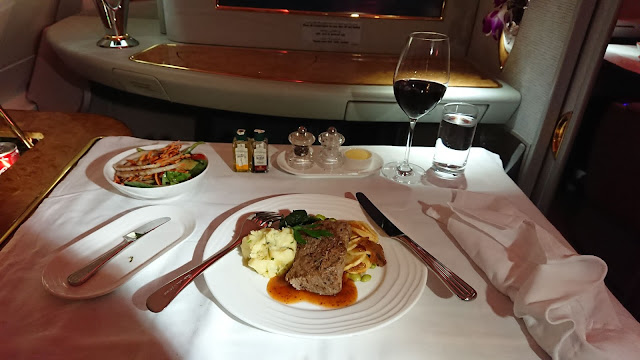 A vast selection of Entrées, Mains, Sides and Desserts were available with a generous amount of condiments. Multiple sets of metal cutleries were offered throughout the meal with the hostess asking periodically to see if there was anything else I'd want.
As a kiwi I love my lamb shanks, so no surprise there when I ordered a lovely
portion of lamb shanks served with mashed potatoes. The flavour was a bit bland for my liking but that's probably due to the altitude, with the near-perfect presentation on the plate it was overall a highly satisfying meal. 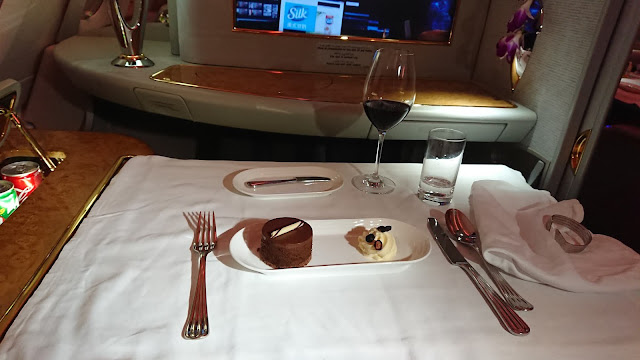 Desserts were served with a new set of cutlery, I've always had a sweet tooth, for me a chocolate mousse is a perfect finale for this wonderful meal. The melt in your mouth texture while accompanied by bold hints of almond hint made it one of the most nicely done desserts I've ever had.

For me the meal service was phenomenal, with almost as many choices as a small restaurant, it was certainly one of the best dining experiences on a flight. 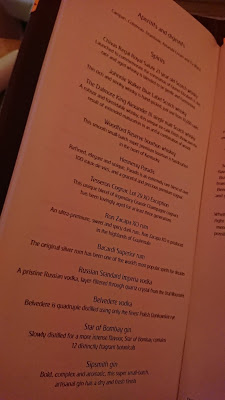 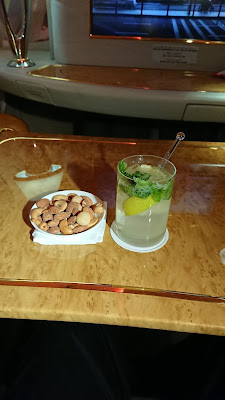 After the meal, it was almost two hours into the flight, so I decided to relax and asked for a nice Mojito from the bar with some nuts. That was very well made with some fresh mint leaves and a wedge of lemon, the nuts were warm and fresh.

The only mediocre experience about this flight was when I tried to connect to the OnAir Wi-Fi, I was given a very limited amount of data with a very slow connection. I later enquired about the poor connection with the hostess, and the reply was apparently I was not a Skywards member. As a QF member I was quite annoyed since it was actually a code shared flight there was no should be no excuse for not accepting other Oneworld members for the extended Wi-Fi service.

After this slight disappointment, I was quickly brought back to a level of satisfaction when I was presented with an extremely sophisticated entertainment Sytem. I was actually stunned by the amount of content made available in the ICE system, the amount of content was significantly more than any other inflight entertainment systems I've ever experienced. It had hundreds of blockbusters and thousands of music tracks from all over the world.

It was almost time to land, I was given another priority pass for the customs, that really helped me in the busy Melbourne airport where there were constant queues of impatient travelers. The landing was great, professionally executed by the pilot.

To sum all this up, in my opinion this flight has already exceeded most of my expectations and will always set the standards for a world-class first class experience. The only thing they could improve on is the wireless internet connectivity and also the initiative to begin accepting other membership programs within the alliance.

The last flight on this route ended on the 31st of March 2018, only a few days after when I had this flight. I probably will never fly any A380s for my trans-tasman travel, but this experience has certainly promoted the business model of Emirates to me, since Emirates is now my first choice for flights heading towards the UAE and beyond.

UPCOMING TRIP: Farewell to the queen of the skies

Neil Z
Auckland, New Zealand
My name is Neil and I absolutely love travelling! I grew up in the beautiful country of Aotearoa - The land of the long white cloud, I've always wondered what's beyond those blue skies and evergreen pastures, and why the Fantails in my backyard could fly with the uttermost freedom. I started enjoying travelling ever since I graduated high school, it was this curiosity deep down made me someone a tad different. Looking back it has been almost a decade, today I still get the same kind of awe when flying, but instead of curiosity, it is now a kind of passion mixed with a sense of belonging. After accumulating over 100 trans-tasman flights and multiple scores of international flights, I am still as passionate about flying as I have ever been.